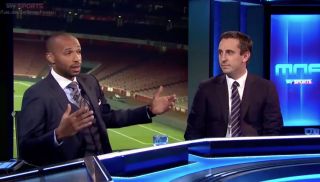 It it still seen as a debate many have to this day, but in truth Gerrard couldn’t lace Scholesy’s boots.

In a segment on Monday Night Football, the former Arsenal and Barcelona striker was asked by a fan if there were any players, current or former, with whom he would like to have played with.

The French legend claimed that Scholes would be his first choice.

Joined in the Sky Sports studio by Gary Neville and Jamie Carragher, you can see by the former’s facial expression that he was delighted with what Henry was saying about his ex-teammate.

Sky Sports presenter Ed Chamberlain asked the above question to Henry, who replied “Paul Scholes” before giving his explanation.

“The next one would have been, right behind, very close, Stevie G. But I have to go with Paul Scholes,” Henry said, as per The Mirror.

“He was just ahead in his head. He made Manchester United tick. Every time we were playing them we needed to find a way to stop him.

“It’s true. I think Stevie G comes really close to him. But Paul Scholes would have to win.”

Henry: “I love Stevie G but I have to go with Paul Scholes. He made Manchester United tick.”