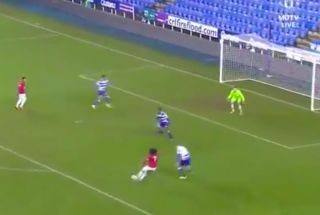 With the scoreline finely poised at 2-1 to the Reds, the winger put the game beyond Reading’s reach with an unstoppable curling effort after cutting inside from the right-wing.

Neil Wood’s side eventually ran out 4-1 winners in the Premier League 2 Division 2 game.

Chong’s involvement on Monday evening means that it is unlikely that we will see him in the Carabao Cup quarter-final at home to League 2 Colchester on Wednesday.

The 20-year-old Dutchman has yet to make his mark in the first-team at Old Trafford, despite many standout performances in the youth setup.

Solskjaer is expected to make several changes against Colchester, with Mason Greenwood expected to start after he salvaged the Reds a draw against Everton on Sunday.

It may be most beneficial for Chong’s career to move out on loan in January, so he can gain more invaluable experience of regular first-team football.

See his strike below:

How about that for a goal? 🎯

After setting up Traore to put #MUFC ahead, Chong extends the lead by cutting inside and finishing with a stunning solo effort!

Catch the rest of the second half live on #MUTV: https://t.co/Dosi5UFQqW pic.twitter.com/cQ9wmDcfDr