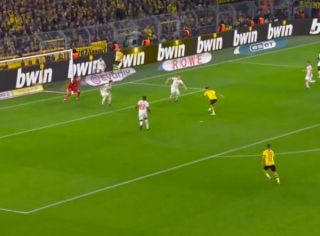 Jadon Sancho was on the scoresheet yet again for Borussia Dortmund in a thrilling Bundesliga match against league leaders RB Leipzig.

Dortmund failed to close the gap on Leipzig to one point as the game finished 3-3, with Timo Werner twice on the scoresheet for Red Bull.

Sancho has now scored 9 goals and contributed 8 assists in the Bundesliga this season, a stunning return for the 19-year-old who was said to be unhappy in Germany.

A report by Talksport last month claimed the England international was considering his future in Germany after being treated like a ‘scapegoat’ at Dortmund.

And according to a report in the Mirror this week, United believe they are in pole position to sign Sancho, who is undoubtedly one of the most talented youngsters across world football.

It would seem unlikely that a move of such magnitude would be completed in the January transfer window despite the fact Ole Gunnar Solskjaer needs attacking reinforcements.

However, if they can tempt the 19-year-old to Old Trafford in the summer then United would have a special talent on their hands.

See his goal from tonight’s game below, courtesy of BeinSports:

Jadon Sancho in the Bundesliga this season:

He’s been directly involved in a goal in 8 consecutive games in all comps. 🤯 pic.twitter.com/i5weEIOy5B