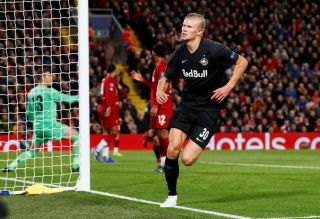 Red Bull Salzburg striker Erling Haaland has been strongly linked with a move to Manchester United in the January transfer window. The Red Devils will know if they will be able to sign the highly-rated forward in the next week if German reports are to be believed.

According to Bild, via Sport Witness, Haaland will make up his mind on his future before Christmas, making for a smooth transfer once the window reopens next month.

United are one of the favourites to land the Norwegian striker, who played under Ole Gunnar Solskjaer at Molde.

READ MORE: Man Utd scout Club Brugge forward a day before being drawn against Belgian side in Europa League

The son of Alfe-Inge Haaland has also been linked with a move to Germany, with RB Leipzig sporting director Markus Krosche confirming the Bundesliga outfit have made an offer to sign the forward.

Krosche told Kicker (via the Mirror): “We have shown what we can offer him and which part he could play in our team. It’s now up to him.”

With Salzburg eliminated from the Champions League, Haaland’s side are now Europa League hopefuls and could end up facing United if both teams progress from the round of 32.

However, the Europa League knockout phases doesn’t kick-off until February and there’s a chance now Haaland could be playing his football elsewhere.

Who will be sacrificed from the current line-up remains to be seen.

Ryan Giggs has given his thoughts on Anthony Martial after the Frenchman’s lacklustre display against Everton on Sunday.

The former Monaco striker needs to take his chances this season or it will be him axed from Solskjaer’s plans, with a deal for Haaland now looking possible.