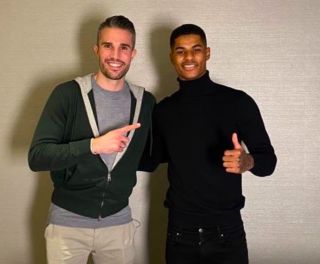 Rashford is in the form of his young career at the moment under Ole Gunnar Solskjaer, and seems to have found his best position on the left-wing in the Norwegian’s 4-2-3-1 system.

While Rashford has massive talent and is delivering the goals for club and country, he is still developing as a player and can certainly learn a thing or two from the great Van Persie.

Van Persie’s first season at Old Trafford was special; he scored 26 goals in the Premier League, leading the Reds to the title in Sir Alex Ferguson’s last season at the club.

An extraordinary £24m signing from Arsenal (BBC Sport), the Dutchman will go down as one of the great United strikers for his first season at the club alone.

The pair have both been selected in the Stretty News Manchester United team of the decade and it certainly begs the question: Just how good could a strike force of a prime Robin Van Persie and Marcus Rashford been at Old Trafford?

Great to catch up with this legend and learn from the best 👍🏿 pic.twitter.com/2397duVGjo

Imagine you two on the same team 😍😍

Prime Robin alongside you would be unreaaaal

I love you guys so much, wish that you had played together

Can definitely learn a thing or two from him Marcus lad😍😍😍😍😍😍

oh man i wish i saw this partnership

Very little between them; patience is key. 🔑 pic.twitter.com/mhTbciLbHu