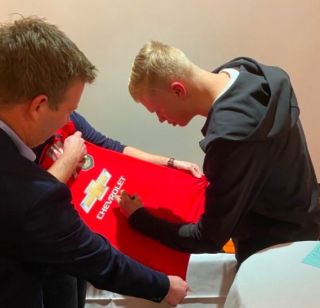 Transfer window silly season is upon us and we haven’t even hit January yet.

While we cannot confirm this photo is genuine and could still be fabricated, it has sent many fans into meltdown on social media.

Ole Gunnar Solskjaer needs a striker in the January transfer window to provide competition to Anthony Martial, and prolific goalscorer Haaland is his number one target according to widespread reports.

According to a report in the Sun today, Solskjaer is increasingly confident of signing the man he struck a good relationship with at Molde. The report claims that Haaland is set to sign for the Reds in a huge £76m deal and remain at RB Salzburg until the summer when we will move to Old Trafford.

The 19-year-old prodigy is one of Europe’s most coveted stars and his signature would be a huge coup for Solskjaer who is in need of reinforcements in January.

We will leave you to make your own mind up on the validity of this photo where it appears Haaland is signing a red shirt.