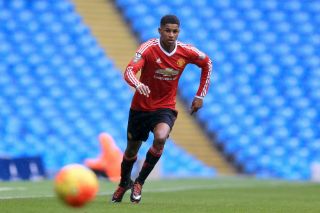 Marcus Rashford has recalled the moment David Moyes gave him when he was first invited to train with the Manchester United first team.

You won’t find many positive stories about Moyes from his time at Man Utd, but this is certainly something Rashford won’t ever forget. Not even now that he’s a star at Old Trafford.

READ MORE: Man Utd scout Club Brugge forward a day before being drawn against Belgian side in Europa League

But it was Moyes who gave Rashford his initial taste of first team action when he was 16.

“It was under David Moyes, and it was a group of us that went over,” Rashford told ESPN. “It was an amazing feeling. I remember the training session: We didn’t actually touch the ball.

“We were just doing shape and stuff like that. But then we go back to our own age group,. And what you learned from that little 15 or 20 minutes is priceless as a young academy player.

“Those moments really do start to add up, and when you start training with them more regularly, you pick up more things, more things to learn from. That’s how you become a first-team player.”

Rashford may have only recently turned 22-years-old, but he is now seen as one of the senior players at United, with the likes of Mason Greenwood and Tahith Chong looking up to the youth team graduate for inspiration.

This season we came to the conclusion that Rashford is not a centre-forward and is better used on the left-wing. Anything is possible when he cuts in and frightens defenders whereas up front he tends to get lost in games, completely isolated without a proper playmaker behind him.

Moyes is currently without a job but had been linked with the Everton job following Marco Silva’s recent sacking.

However, Sky Sports claim the Toffees are about to appoint Carlo Ancelotti.