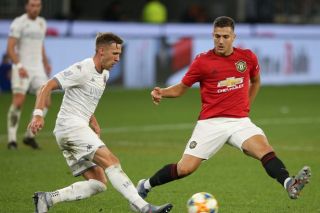 Diogo Dalot could return from a two-month absence in Manchester United’s League Cup quarter-final with Colchester on Wednesday night.

Dalot, 20, has not featured for the Red Devils since coming off in the second-half of United’s 1-0 defeat at Newcastle in October.

The Portuguese full-back resumed full training last week and is in contention to start against Colchester.

Still without Paul Pogba, Ole Gunnar Solskjaer indicated Marcos Rojo would not be fit in time to face the League Two side despite also returning to training last week.

“Maybe Diogo [will be back] after he’s had a week of training but probably no-one else,” Solskjaer said (via Manchester Evening News).

“We’ve got a squad and we’ve got to rotate and we did that on Thursday [against AZ Alkmaar], so we’re going to make changes again because there are so many games.

“I hope and I think the team I’m going to put out is going to be a strong enough one to win a game. At home against a League Two side you’re big favourites and we’ve got to accept that but we have to go out there and earn it.

“It’s going to be strong enough to create chances and hopefully score goals.”

Although they’re a League Two side, Colchester reached the last eight of the League Cup by eliminating Tottenham Hotspur and Crystal Palace. That’s a big enough warning for our lads not to underestimate tomorrow night’s opposition.

Solskjaer spoke about Colchester too, saying, “I watched the Tottenham game and I started watching the Palace one yesterday. They are a well-organised and disciplined team that’s going to make it hard for us, like we’ve played against today, well-organised.

“But we’re favourites and we should be able to create chances and hopefully go through.”

It would do Solskjaer the world of good if United can win a trophy in his first full season in charge. That along with Champions League qualification would make it a decent campaign for this team that has started the long process of rebuilding.

A win on Wednesday will put us into the League Cup semi-finals.