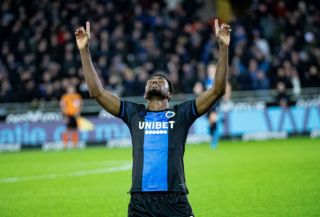 The 22-year-old Nigerian striker has been linked with a move to Leicester City on a number of occasions, with the latest report that he could join Brendan Rodger’s side last week, as per Leicestershire Live.

But according to Eurosport journalist Manu Lonjon, Ole Gunnar Solskjaer sent scouts to Brugge to watch Dennis in action as his side lost 3-0 against KV Mechelen on Sunday — before United drew the Belgian side in the Europa League round of 32.

The reporter shared this update on Twitter as Dennis scored a back-heeled goal in that game to take his tally to seven goals in all competitions this season.

Solskjaer needs to sign a clinical goalscorer and the most prominent name doing the rounds at the moment is Red Bull Salzburg’s Erling Haaland. Not only is the Norwegian younger than Dennis, he’s also proven in the Champions League and is one of the hottest prospects in world football.

However, it would be a very Ed Woodward move to miss out on Haaland and sign someone relatively unknown and older. That’s a criticism of United’s recruitment rather than Dennis, who for all we know could be a great striker.

Is Dennis ready for such a big move? That’s the biggest question now and his representatives will be sure to consider all options as we draw closer to the January transfer window.

There is no mention yet of how much the young Brugge forward would potentially cost.