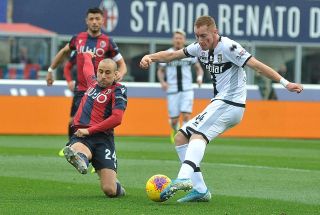 Dejan Kulusevski’s agent insists Manchester United are not the only Premier League club scouting his client.

The Sweden international has been impressing in Italy the season for Parma, who he joined on loan from Atalanta in the summer.

With four goals and six assists in 18 games so far, Kulusevski has been reportedly linked with a number of clubs around Europe, and Man Utd are one of those credited with interest, as per The Sun.

The winger came through the Academy at Atalanta, after moving to Italy in 2016.

United are being pushed strongly as potential suitors for Kulusevski which is convenient for any agent when they’re trying to get a big move for a client.

He’s certainly a player we’d imagine Ole Gunnar Solskjaer being interested in, with an eye for goal, aged just 19, and emerging on the world football scene as a youngster with real potential.

Kulusevski’s agent Stefano Sam has confirmed his client has plenty of options if he leaves Atalanta.

“The boy’s dream is to play in a great team, but it’s everyone’s dream,” he told Radio Punto Nuovo, quoted by Calcio Mercato (via Sport Witness).

“What Dejan wants is a great leap, reasoned and studied, putting all the parties together. Manchester United and Kulusevski?

“He is followed by several Premier League clubs; he could have left this summer too.

“He is doing very well now, we decided to take this route at Parma, and the boy was very intelligent from a sporting point of view.

“There were so many great offers this summer; we went to Parma because to get to the big ones you have to do the right path.

“I call him a soldier on a mission: he works and never complained, much less anyone complained about him.

“He is hungry and wants to arrive, combined with a talent and a physique not indifferent: he cannot but have a rosy future.”