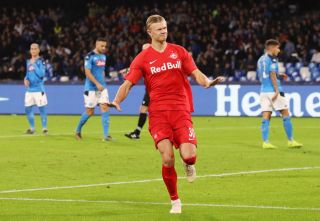 The frenzy on social media in response to the photo of Erling Haaland signing a Manchester United shirt is a reminder that we about to enter peak transfer mania.

An image emerged this evening on twitter of the 19-year-old RB Salzburg striker signing a United jersey, prompting many fans to suggest Haaland to United was all but a done deal.

While it appears there is a good chance Haaland’s next move could be to Manchester, the reactions online have certainly been overzealous.

As explained by Manchester Evening News journalist Samuel Luckhurst, the photo was taken at the backstage of an event in his hometown in Bryne.

Widespread reports suggest Haaland, who has netted 24 times already for Red Bull this season, has been identified as Ole Gunnar Solskjaer’s top target this January.

The Sun report that the Reds are confident of sealing a deal for the promising forward, who would be loaned back to Austria until the end of the season.

When asked about Haaland in the press conference after the Everton game, Ole Gunnar Solskjaer cryptically responded (via BBC):

“I don’t have to offer any advice to other teams’ players.”

Haaland will be well aware of the ongoing media circus surrounding him and we assume he knew exactly what he was doing with his following social media posts.

The youngster posted several Instagram stories of him signing shirts, presumably for clubs he has played against or has a connection with.

Manchester United’s jersey was the first Haaland had posted after the original photo had emerged online, and was noticeably at a different time to the others with the Norwegian wearing different clothes.

It seems as though Haaland may be teasing United fans here; or his posts of other shirts are a bizarre attempt to justify the signing of the United one.

Regardless of Haaland’s social media antics, we hope he can sign the dotted line to move to Old Trafford next month as Solskjaer needs attacking reinforcements and the 19-year-old is one of the most coveted goalscorers across Europe.