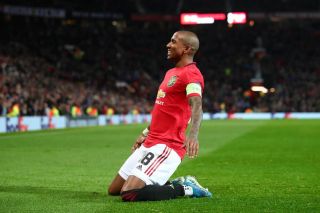 Ashley Young expects to be released by Manchester United at the end of the season, according to the Evening Standard.

The 34-year-old is out of contract in the summer is yet to open talks over a new deal.

This was coming, of course, with Young reaching his mid 30s.

The former winger turned full-back will be free to talk to overseas clubs from January.

After nine years at Old Trafford, Young’s time looks set to end. First team opportunities are already limited by the emergence of Brandon Williams at left-back, while Diogo Dalot will resume as first choice cover for Aaron Wan-Bissaka on the right once he recovers fully from injury.

Young was given a one-year contract extension last season, but now it looks like Ole Gunnar Solskjaer is planning for the future at full-back by calling time on Young’s United career.

Speaking about his transfer plans last week, Solskjaer said (via ESPN): “We’re looking to strengthen in many positions.

“If you look at our squad compared to others we’re getting there, but need two or three players to have a squad with enough numbers to rotate throughout a long season and we’ll see what we sign.”

Luke Shaw was very bad at left-back on Sunday against Everton and it’s probably too soon for Brandon Williams to be a regular starter in the first team. That makes us think about Solskjaer’s plans and if he’ll dip into the market for a new left-back?