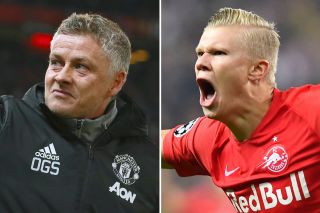 David Ornstein is one of the most reliable football journalists out there, even if his previous spell at BBC Sport saw him more popular with Arsenal fans than anyone else. Now with The Athletic he has a Monday morning column that looks at all Premier League related issues.

The line from Ornstein this week is plain and simple. United focused on Haaland — not Minamino.

So, Manchester United are in talks with Red Bull Salzburg over a January move for Erling Haaland, but contrary to reports (we didn’t believe anyway) the club did not make a move for the Norwegian’s team-mate Takumi Minamino, who is set to sign for Liverpool next month.

READ MORE: These Man Utd fans are all saying the same thing about Mason Greenwood

Nothing was said about United being interested in Minamino before Liverpool triggered his £7.5m release clause — and it sounded like the giddy Scouse media were just getting ahead of themselves.

Funny how claims of Man United interest in Takumi Minamino have been coming from LFC journalists. That means it’s from Liverpool as a club, which is oddly bizarre even if it were true. Stop being so bloody ‘chip on shoulder’, you’re good now, no need, bit weird.

The Athletic understands the suggestion that United were beaten to Minamino’s signing is incorrect.

Ole Gunnar Solskjaer and Ed Woodward travelled to Austria to meet Haaland’s representatives on Friday, and Ornstein believes Salzburg are open to a sale in January.

When asked about Haaland after Sunday’s 1-1 draw with Everton, Solskjaer said (via The Mirror): “There’s been plenty of speculation, and you know I won’t talk about that, but he [Haaland] has had a great career in Salzburg, so he knows what he want to do.”

All hints suggest now that we’ll make a move for Haaland in January and what a swoop that would be!

The Norwegian has everything it takes to be a world-class striker and that’s exactly what United are crying out for.