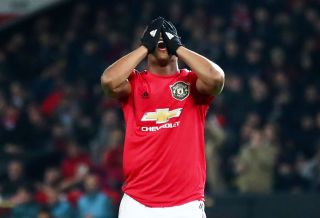 Ryan Giggs has criticised Anthony Martial after a disappointing display in Sunday’s 1-1 draw with Everton.

The Frenchman offered little to nothing up front and it took a substitute cameo from youth team graduate Mason Greenwood for Manchester United to find the back of the net.

Martial struggled to make a telling contribution during the match and Giggs says he needs to do more to influence matches at the top-level.

This season was supposed to be one for Martial to cement a role in the team and he hasn’t done that, despite being incredibly talented.

“He is talented, and he’s not a bad kid, but the problem he has is that he looks lethargic all the time,” Giggs told the Premier League, via Daily Mail. “He looks casual, as if he’s not bothered.

“When it comes off, and he’s doing brilliant things, you say it just comes naturally. But when it’s not, you think: he’s not running, he’s not trying, he’s not working hard enough, he’s not holding the ball up.

“So in my eyes he has to try extra hard because of his persona, because of the way that he moves.

Giggs has worked closely with Martial during his time as a coach under Louis van Gaal and he is sure to know more about the player’s characteristics than most.

Are we forgetting something here? This season Ole Gunnar Solskjaer started the season without replacing Romelu Lukaku. This was a golden opportunity for Martial to make previous managers eat their words and finally grow as a player.

Marcus Rashford is taking his opportunities out wide on the left.