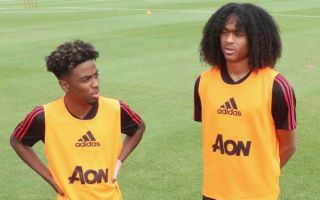 Anything footballers do on social media tends to get blown out of proportion.

That may the case again, but Angel Gomes could also be showing signs of petulance in attempt to leave Manchester United next month.

Gomes went on the pre-season tour with Man Utd and performed well but none of us had any idea if he’d feature in the team regularly once the competitive season began in August.

All eyes will be on Ole Gunnar Solskjaer’s squad to face Colchester in the League Cup quarter-final on Wednesday night. The Norwegian tends to prefer Jesse Lingard and other players to the youth player.

Angel Gomes has removed #mufc from his bio and most of his United pictures from his Instagram.

It’s possible that he or someone working on his social media cleaned up his profile, though it still strikes us as strange.

A couple of months ago, talkSPORT claimed Barcelona were interested in signing Gomes amid doubts over his future at Old Trafford.

Gomes has not had much first-team action and there’s little to suggest he will be offered a new deal. His current contract expires at the end of the season, so Barcelona or any team outside of the Premier League will be allowed to make contact in January over a pre-contract agreement.

Usually we wouldn’t take any notice of what footballers do on social media, whereas other outlets look for hints that suggest at potential targets.

This time we’re not sure. We’ve not seen Gomes for quite some time and this doesn’t sound very good.