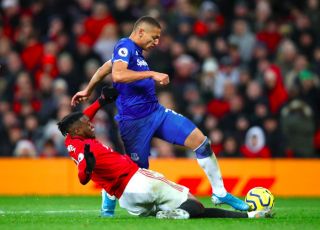 Aaron Wan-Bissaka was one of Manchester United’s standout performers in the frustrating 1-1 draw against Everton at Old Trafford.

The right-back was yet again flawless when going to ground in the tackle, completing a second consecutive game with a 100% tackle success rate.

Wan-Bissaka was responsible for keeping Richarlison quiet down the left-flank, and made numerous crucial challenges as the Brazilian forward looked to be causing problems in the United box.

READ MORE:  Man Utd on longest run without a clean sheet in 48 years after Everton draw

But despite the youngster’s excellent defensive work, United failed to capitalise on a great opportunity to move within two points of the Champions League places.

Victor Lindelof’s first-half own goal now means United have not kept a clean sheet for 12 league games in a row, their worst run since 1971.

Ole Gunnar Solskjaer’s side now sit sixth in the table after being leapfrogged by Jose Mourinho’s Tottenham who won late on at Wolves.

The Reds will look get back to winning ways against Watford next Sunday after having their momentum disrupted by Duncan Ferguson’s Everton side this afternoon.

Aaron Wan-Bissaka won 7/7 tackles vs. Everton, more than any other player on the pitch.