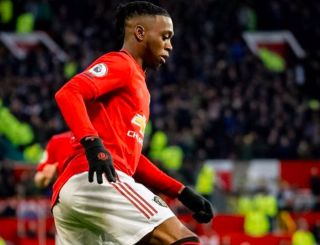 Aaron Wan-Bissaka was arguably Manchester United’s best player in the draw against Everton this afternoon.

The result is another step back for Ole Gunnar Solskjaer’s side, who have he’d their momentum halted again after consecutive victories over Tottenham, Manchester City and AZ Alkmaar.

United missed the opportunity to go within two points of the Champions League places after Chelsea were defeated at home to Bournemouth yesterday.

The Reds were facing an Everton side led by interim boss Duncan Ferguson depleted with injuries, but the familiar struggles returned as United failed to create enough clear cut opportunities against a deep-lying defensive unit.

Wan-Bissaka was brilliant at right-back for the Reds however, keeping Brazilian forward Richarlison quiet on the left-flank. Richarlison attempted to cut in and create problems in the United box numerous times but was thwarted by Wan-Bissaka on each occasion.

The 22-year-old completed a second consecutive match with a 100% tackle success rate.

However, the Reds are evidently frustrated with just a point and Wan-Bissaka conceded that the Reds should be doing better against the weaker opposition.

Fought hard for the point but should be doing better. @_MasonGreenwood keep it up 🔥🕸🔴 #AWB #MUFC pic.twitter.com/Qp5emuOXeT