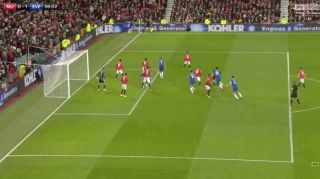 David de Gea was at fault for Everton’s goal in today’s game at Old Trafford, according to Sky Sports pundits Gary Neville and Graeme Souness.

The match ended 1-1 and Victor Lindelof’s own goal is bound to be discussed a lot over the coming hours.

Souness admitted that VAR should have chalked Everton’s goal off after replays showed that De Gea was struck in the face by Dominic Calvert-Lewin’s elbow as he missed his punched attempt to clear the ball.

Even though we agree with Souness that the goal should not have stood, De Gea is expected to do a lot better in these situation. At the very least the Spaniard should be commanding inside his own box.

Neville didn’t have as much sympathy with De Gea on commentary and said the goalkeeper was caught being bullied.

“That’s back to de Gea’s early days at United – getting bullied.”

Lindelof can do nothing about it but his own-goal opens the scoring at Old Trafford!