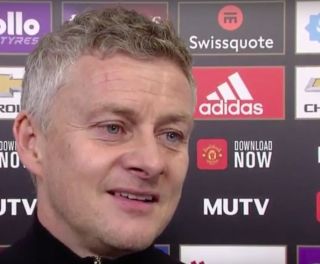 Ole Gunnar Solskjaer was left frustrated as Manchester United failed to capitalise on a brilliant opportunity to close the gap on the top four with a draw against Everton.

The Reds failed to make it four consecutive wins against a depleted Everton side led by interim boss Duncan Ferguson.

United had the better of the chances in the game, but yet again failed to show a cutting edge to put away a team lower down in the league table.

Solskjaer will find himself unlucky at the awarding of Everton’s opener as Dominic Calvert Lewin was deemed to have done nothing wrong on in the build up to Victor Lindelof’s own goal.

Replays from a VAR review clearly showed the striker made contact with David De Gea’s face, but the video referee decided there was not enough to overturn the original decision.

Mason Greenwood salvaged a draw for the Reds in the second-half with an excellent Robin Van Persie-esque finish, but the Reds failed to push on to find a late winner.