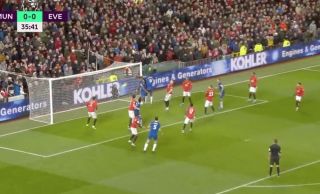 Everton take the lead at Old Trafford thanks to a Victor Lindelof own goal.

It was an absolutely ridiculous goal to concede – but it also raises the question why can’t Manchester United defend corners?

The clearance in the lead up to the goal by Luke Shaw was woeful. Straight to an Everton player to allow them attack again.

Lindelof looked like he did when he first joined United. Bullied.

That said, David de Gea needs to be stronger. The Spaniard should be claiming his area but it doesn’t really help having a hand across your face.

However, by De Gea’s reaction to the goal he knows he should be doing better.

The lads need to come out with fire in their bellies for the second-half. This is a golden opportunity to close some of the gap between us and Chelsea in fourth.

Everton boss Duncan Ferguson has been entertaining the crowd with his attire on a rainy Manchester afternoon — wearing a sleeved shirt after removing his jacket.

Watch the goal below, courtesy of RMC Sport 1:

Lindelof unlucky. DDG has to do better.