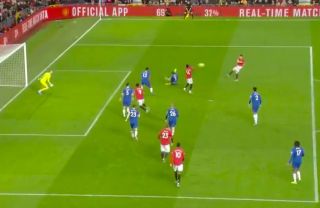 Jesse Lingard took a shot straight in the face from Manchester United teammate Daniel James as the Reds looked for an equaliser against Everton at Old Trafford.

Ole Gunnar Solskjaer’s Reds had a great opportunity to move within two points of the Champions League places against an opposition depleted with injuries, but failed to capitalise on Chelsea’s home defeat to Bournemouth yesterday.

Everton had taken the lead in controversial fashion after Dominic Calvert-Lewin was not adjudged to have fouled David De Gea in the build up to Victor Lindelof’s own goal.

United were piling on the pressure before they eventually equalised thanks to substitute Mason Greenwood’s excellent low finish.

Daniel James missed a great opportunity to level, inadvertently striking his teammate Jesse Lingard in the face with a left-footed effort after Luke Shaw had his effort parried by Jordan Pickford.

Watch as Lingard is hit flush on the face below:

Jesse Lingard takes a shot from teammate Dan James right in the face! 💥