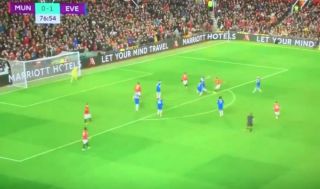 Mason Greenwood continues to show the world what he’s about with an equalising goal against Everton.

Manchester United needed a goal with the clock running down — now we’ve about 10 minutes to clinch a winner.

Ole Gunnar Solskjaer had only brought Greenwood on as a sub to replace Jesse Lingard and the youngster has made an instant impact.

Caught Offside ran a piece earlier showing how Greenwood was going through a folder of tactics moments before taking to the pitch.

Watch the goal below courtesy of Canal+: