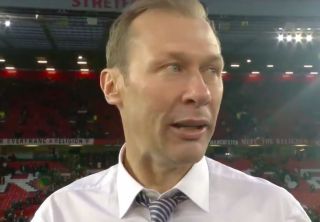 In what was potentially a job audition for the Scot, a depleted Everton side fought tirelessly and were rewarded with a deserved point with United failing to make it four consecutive wins.

Undoubtedly the most controversial moment in the game came when Everton opened the scoring. Victor Lindelof scored an own goal at the back post after David De Gea failed to deal with Leighton Baines’ corner.

While the Spaniard could have been more commanding of his area, Everton striker Dominic Calvert-Lewin clearly made contact with his face as he attempted to punch clear.

In truth, it would have been a soft decision if the goal had been overturned by VAR, but many thought that contact in the face would be deemed a foul.

Ferguson, who expressed his delight at Everton’s efforts in an interview with Sky Sports, joked that ‘in this day and age it probably is a foul-everything is!’.

See his immediate post-match reaction below:

Duncan Ferguson LOVES being Everton manager and his passion shows in this brilliant post-match interview! 👏🔵 pic.twitter.com/Rxu92fgv9R