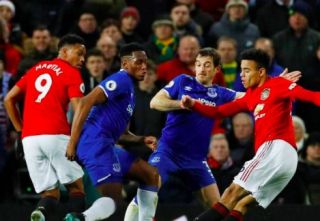 Ole Gunnar Solskjaer admitted it is becoming difficult to leave Mason Greenwood out of the team after the youngster salvaged a point for Manchester United against Everton at Old Trafford.

The 18-year-old again had to settle for a place on the bench for the Reds, despite scoring with two clinical finishes against AZ Alkmaar in the Europa League in midweek.

But his impact from the bench was yet again outstanding, as he clawed United back into the game with a finish that was Van Persie-esque from the edge of the area.

Greenwood’s strike low into the bottom corner beyond the reach of Jordan Pickford could have given United the platform to go on and win the game, but Solskjaer’s side failed to push on for the winner.

Despite obvious frustrations at the result, Solskjaer heaped praise on Greenwood for his third goal in two games.

“Mason Greenwood is different class in and around the box,” the Norwegian said, as quoted by Manchester Evening News.

“You’re not surprised when he scores goals. It’s fitting that it should be an academy player that scores in the 4,000th match [in a row in which Utd have fielded an academy product] and it makes it hard for me to leave him out.”

Solskjaer has a selection dilemma against Watford next Sunday; Greenwood could take the place of Daniel James on the right-flank.