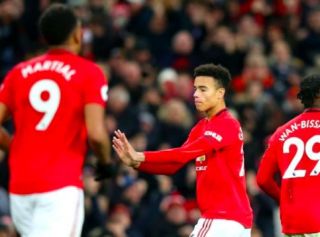 Ryan Giggs has criticised Anthony Martial for his recent performances at Manchester United.

The Frenchman had little impact on the game as the Reds drew 1-1 with Everton at Old Trafford, with Mason Greenwood salvaging Solskjaer’s side a point.

In fairness, Martial made some exciting exchanges with his attacking teammates, but was too often isolated as a loan striker and given little service to feed off.

United legend and former interim boss Giggs weighed in on Solskjaer’s attacking options, and thinks Martial should be concerned about his place in the team.

“He is talented, and he’s not a bad kid, but the problem he has is that he looks lethargic all the time,” he told the Premier League, as quoted by the Metro.

“He looks casual, as if he’s not bothered. When it comes off, and he’s doing brilliant things, you say it just comes naturally. But when it’s not, you think: he’s not running, he’s not trying, he’s not working hard enough, he’s not holding the ball up.

“So in my eyes he has to try extra hard because of his persona, because of the way that he moves. But he doesn’t look like he breaks sweat and when United are chasing a game you want someone to get across the front post – you might not score, but your teammate might score.

On Greenwood, Wales manager Giggs added: “He looks a threat, every time he comes on. I think Ole is handling him in the right way at the moment, bringing him on, impact player. ‘It’s just how long you can keep him like that, because also when he starts games he’s scoring goals. We talk about Martial, he’s not doing enough, he’s not much of a goal threat, no chances in the box, so it won’t be long before Mason Greenwood starts.”

Greenwood has been on fire this season for the Reds, and was unlucky to miss out on a starting spot this afternoon after his goals against AZ Alkmaar in midweek.

While Martial has not delivered goals in recent games, his build up play is encouraging and he should retain his place in the team. But in-form Greenwood now has to start next Sunday’s league game against Watford, and he may take the place of Daniel James on the right-flank.