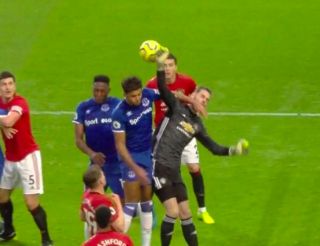 Manchester United will find themselves hard done by to only come with a point against Everton at Old Trafford this afternoon.

The Reds had the chance to go within two points of the Champions League places but could only muster a draw against the depleted opposition led by interim boss Duncan Ferguson.

Everton’s contentious opening goal will be the main talking point of the game, and prompted a social media response from United goalkeeper David De Gea.

Leighton Baines’ corner was not dealt with by the Spaniard and the ball struck Victor Lindelof at the back post before trickling into the net.

While De Gea should have been more brave in commanding his box, contact was clearly made with Dominic Calvert-Lewin who leaned his arm across the Spaniard.

Despite the fact the decision went to VAR, the goal was soon cleared as there was not enough contact for it to be deemed a foul and the goal to be overturned.

It certainly begs the question; how much more contact does the striker need to make with De Gea in order for it to be adjudged that the ‘keeper was impeded?

De Gea is clearly unhappy with the awarding of the goal, but surprisingly did not voice his concerns to the referee immediately after the ball went in.