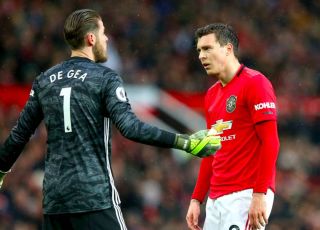 Manchester United missed a huge opportunity to close the gap on the top four after being held by Duncan Ferguson’s Everton at Old Trafford.

The Reds have now gone twelve Premier League games in a row without keeping a clean sheet, their worst run since 1971.

Everton’s goal was so avoidable as well; David De Gea was too weak in trying to punch Leighton Baines’ corner and the ball diverted off Victor Lindelof at the back post and trickled into the net.

Despite the fact Ole Gunnar Solskjaer made significant investment in is defence this summer with the additions of Harry Maguire and Aaron Wan-Bissaka, sloppy goals are still being conceded on a consistent basis.

These mistakes mean that time and time again the Reds are struggling to get over the line against teams lower down in the league.

Mason Greenwood scored United’s second-half equaliser with an excellent finish, but the Reds failed to score the crucial second goal that would have secured victory, meaning momentum is halted once again for Solskjaer’s men.

📊 Man Utd have now gone 12 league games without a clean sheet – their longest such run since April-August 1971 pic.twitter.com/oXdiXrnAVH