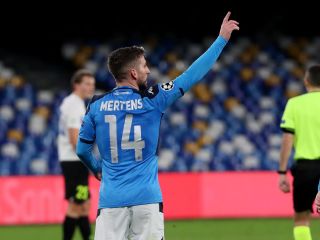 TuttomercatoWeb claim Manchester United are one of a number of clubs keeping tabs on Napoli star Dries Mertens, who will be out of contract next summer and free to discuss a move to a club outside Italy from January.

The Belgium international is closing in on Marek Hamsik’s all-time goalscoring tally for the Italian club after overtaking Diego Maradona’s record, and it is believed that he won’t be offered a new and improved contract by Napoli chairman Aurelio De Laurentiis.

Mertens on a Bosman would be a deal worth considering — but at 32, United shouldn’t be relying on the Napoli star to come in and transform the attack by himself.

He’s renowned for having outrageous pace and scoring lots of goals, so it’s definitely worth considering, but his legs aren’t going to last forever and that’s probably the reason De Luarentiis doesn’t think Mertens warrants a bigger deal at this stage of his career.

That’s what we reckon anyway, plus this could just fit the narrative that United are light on strikers — because it makes it easier to link us with anyone who knows where the back of the net is…

The attackers we have in our ranks — Anthony Martial, Marcus Rashford, Daniel James and Mason Greenwood — are all performing of late but Mertens has a degree of experience they all lack and a move could benefit them all at Old Trafford.

Solskjaer has been linked with a host of other strikers this season, including Erling Haaland, Lyon’s Moussa Dembele, and Inter Milan starlet Lautato Martinez.