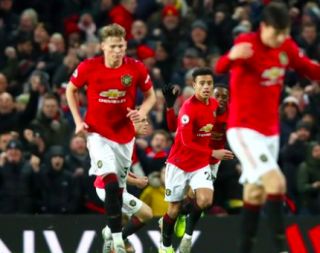 Manchester United fans have called for Mason Greenwood to start in the next Premier League game against Watford after the youngster salvaged a draw against Everton at Old Trafford.

Greenwood scored with an excellent low finish shortly after coming on from the substitutes bench, and is surely in line to start at Vicarage Road next weekend.

The 18-year-old was unlucky not to be named in Ole Gunnar Solskjaer’s starting eleven against Everton this afternoon, after his man-of-the-match performance in the Europa League against AZ Alkmaar on Thursday night.

But he made his impact from the bench as he scored the equaliser that should have been the catalyst for the Reds to go on and win the game.

With a lack of goals in the side, Ole Gunnar Solskjaer can now not afford to leave out such a natural finisher from his starting eleven in the game against Watford.

Daniel James was poor against Everton this afternoon and may have to be sacrificed to allow Greenwood to start from the right-flank in a front three with Anthony Martial and Marcus Rashford.

Great to have @_MasonGreenwood in our team @ManUtd he should start next game against Watford. #GGMU #ManchesterUnited #MUFC #Greenwood pic.twitter.com/1htog4cIGf

Serious question… When is Pogba due back? Greenwood is looking to start more games for me, I'd like to see AWB, Axel,Harry, Williams back 4 against watford just to see. Not putting out Victor but I just want to see how it goes. #MUFC

Greenwood surely has to start against Watford next week..Colchester in the Carabao cup in the week as well should win that

2nd half we controlled most of the game but was very poor in handling DCL, whenever we kept pushing they just lumped it up the air and we was in trouble, abit of magic from Greenwood that saved us a point at the end. Need Pogba back for Watford and hopefully Greenwood starts. https://t.co/usFqJYJxYG

Greenwood should start ahead of Martial against Watford

My Line Up for Watford:-

Ole needs to start Greenwood against Watford and give Lingard a chance against Colchester, not the other way round #MUFC

Greenwood, Williams and Axel start at Watford or else 😡