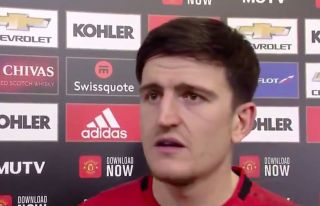 Harry Maguire bemoaned the decision to award Everton’s opening goal as Manchester United had to settle for a point at Old Trafford.

Ole Gunnar Solskjaer’s could have moved within two points from the top four with victory over interim boss Duncan Ferguson’s side.

But the Reds fell behind in controversial fashion when Victor Lindelof diverted the ball into his own net from a Leighton Baines corner in the first-half.

Everton striker Dominc Calvert-Lewin made contact with United ‘keeper David De Gea’s face as he tried to punch the ball. But despite a VAR check, the goal stood.

In reality, De Gea was far too weak in his attempts to clear the corner and was easily bullied by the Calvert-Lewin. There is no doubt it was a contentious decision but if the Spaniard had have been more commanding of his area then the goal was avoidable.

Speaking to Sky Sports, as quoted by BBC, a frustrated Maguire said: “We deserved more. Dominated the game, really. We conceded a goal that was a clear foul. We were disappointed to concede that sort of goal but we bounced back in the second half.”

Maguire’s frustrations are justified as United’s momentum after victories against Tottenham and Manchester City was disrupted by a manageress Everton side plagued with injuries.

United now sit sixth in the league after being leapfrogged by Jose Mourinho’s Spurs, who secured victory late on against Wolves at Molineux.