Manchester United can make it four consecutive wins with victory over Everton at Old Trafford on Sunday.

Chelsea’s defeat against Bournemouth means United can go within just two points from the top four with a win against Everton, currently managed by interim boss Duncan Ferguson.

Solskjaer has confirmed that Jesse Lingard is a doubt to start Sunday’s game, and Paul Pogba is not yet ready to return but will start training next week.

“I’m not sure on Jesse but I hope,” he said (via Manchester Evening News).“He wasn’t training today so we’ll check him on Saturday probably.

Lingard’s absence means Andreas Pereira may assume his role in attacking midfield, despite struggling to prove himself in the position this season. Alternatively, Solskjaer could opt for Juan Mata who was on the scoresheet and contributed an asset against Alkmaar on Thursday.

We expect the midfield pivot of Scott McTominay and Fred to start, after the pair worked brilliantly together in the recent victories over Tottenham and Manchester City.

The United boss has a decision to make on who he starts at left-back, with three possible options to choose from. We think Luke Shaw may be given the nod after an encouraging performance at the Etihad last weekend.

Meanwhile, Marcus Rashford is in the form of his life and will return to the team from the left-wing position where he has been so dangerous in recent weeks.

See our predicted XI below: 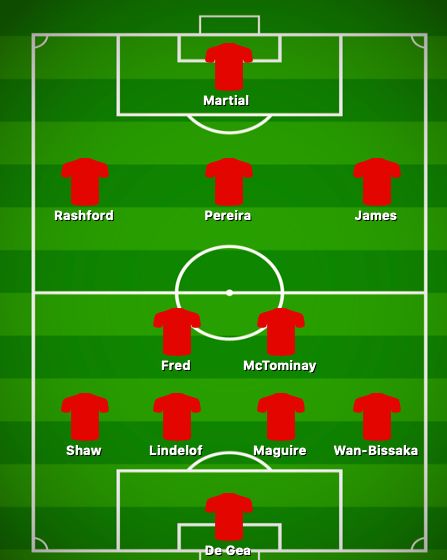