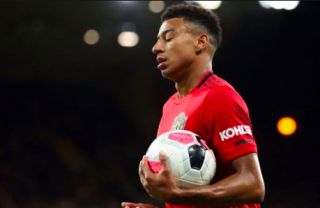 Manchester United fans have come to the support of Jesse Lingard on social media after he opened up on struggles in his personal life.

The midfielder often comes under criticism for his performances for the Reds, but says off-the-field issues have ‘weighed on his shoulders’.

Lingard had to take care of his younger brother and sister when his mother fell ill, and his granddad Ken has prostate cancer.

In an interview with the Daily Mail, Lingard said: “I have been down and glum; just worrying. I felt like everybody just passed all the stuff to me and it weighed on my shoulders. It was like, “Here you go Jesse, you deal with this on your own”.

‘My mum has had some things for years but never really got help. Now she is. So I have been taking care of my brother and sister. They are with me. It has been tough to see my loved ones struggling and then I have to come to work and try to do my job.”

The 27-year-old eventually told Ole Gunnar Solskjaer of his worries and has praised the influence of the United boss.

“He has just told me that everything will be OK. Maybe I just needed someone to say that.

“He said he just wanted the old Jesse back and maybe I can give him that now.

“Sometimes when your worries are so deep you can’t function properly. Now it’s about getting back to my best and I feel I can do that.”

Lingard is an injury doubt for United’s clash against Everton tomorrow, but starred in crucial victories over Tottenham and Manchester City last week and looks to be getting back into form.

United fans on twitter have sent messages in support of Lingard:

This is exactly why the criticism of Jesse Lingard was beyond excessive. It wasn’t just poor form, you could see a change in his demeanour. Life is more important than a football game.

From a @MailSport interview. pic.twitter.com/R9ruT1FisR

Just seen Lingard’s interview. Really feel for the guy but it’s good to see players opening up about off-field problems

Just a friendly reminder you never know what is going on behind closed doors. For months Lingard has been slaughtered by the fans, without understanding the pain he has experienced

What a brilliant role model and I hope his best is still to come!

Jesse Lingard the human being is more important then Jesse Lingard the footballer. He hasn’t performed on the pitch but that doesn’t give you lot the right to have a go at him for what’s happening behind closed doors. #mufc

Honestly i take my hat off to you @JesseLingard standing up and being a man when your family needed you and still having the pressure of being a United player. Fair play 👏👏👏👏