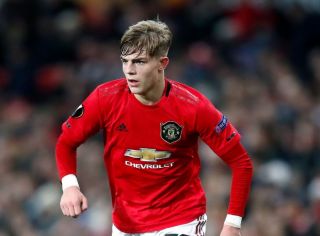 The left-back put in an excellent shift at both ends of the pitch after concerns over his defensive discipline led to Ole Gunnar Solskjaer taking him out of the side for the games versus Tottenham and Man City.

United went on to win these games, so Solskjaer got his call bang on the money, but it was nice to see Williams responding the right way and helping to keep a clean sheet against Alkmaar.

The Red Devils sat back in the first-half, hoping to soak pressure and hit their Dutch opponents on the counter-attack, which meant Williams wasn’t at his adventurous best.

But it showed that he can be disciplined defensively and Solskjaer can take note of that for future big games.

He was given extra license to go forward after the interval as United caused Alkmaar some real problems.

Williams got forward from left-back, created lots of space, looked for one-twos on the flank and contributed in other ways to United’s attacking play.

Here’s how United fans reacted to his performance…

Brandon Williams is a joy to watch, isn’t he? Calm and composed on the ball, loves to get forward and is a tough kid who’ll stand up to anyone. Proper player. Oh, and he’s one of our own 🙌 #mufc pic.twitter.com/RpO0Fwgw0a

He had a very solid game. pic.twitter.com/8lfA9UtwAJ

Brandon Williams made a statement & I think Shaw must do 2 times better what he does best. At the moment I will easily pick Williams over Shaw, we needed a bully, someone who can make runs & track within seconds, great in decision making & be the attacking force #MUFC #MUNALK pic.twitter.com/AbA8lYuS6F

Brandon Williams is showing McT signs… The kid is fearless, that was how McT started- he was scared of nothing, even when he made a mistake, it was made fearlessly and confidently.

Brandon Williams is benefiting from his peers and competitors. Getting better by the game and showed defensive discipline in the first-half against Alkmaar.

Luke Shaw should be scratching his head by now Brandon Williams is really good.