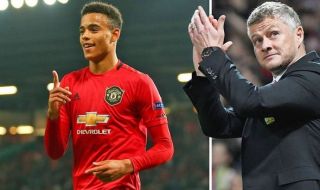 Manchester United manager Ole Gunnar Solskjaer knew Mason Greenwood was destined for the top when he was just seven-years-old.

The Norwegian watched Greenwood train at the Cliff over a decade ago and says he knew the striker was a Man Utd star in the making.

Of course, at 18, he’s still just that but there’s A LOT of excitement building around Greenwood at the moment. His brace against AZ Alkmaar has sent it into overdrive.

“I remember when I met him for the first time because my son was training at the Cliff as an eight-year-old, Mason was seven,” Solskjaer said last night (via ESPN).

“The first time I saw him he stood out and I took a picture with him.

“His dad mentioned it and I do remember the kid because I remember talking to Noah [Solskjaer’s son] about that. So when he signed his contract we had a little nice memory. I knew he was going to be a player.”

It’s important that United do their best to nurture Greenwood and make sure he gets the right amount of game time in order to develop.

After wins over Tottenham and Man City last week, there will be a different atmosphere in and around the dressing room. A lot more positive than the beginning of the season which is good, not just for Greenwood, but all the young lads involved.

Next up for United is a home fixture against Everton.

The last time we played Everton it ended in a humiliating 4-0 defeat but Solskjaer insists the problems from that day back in April have been eradicated.

“We lost quite clearly against Everton last year,” Solskjaer added. “We’ve spoken enough about what happened that day and how we looked like a team. It was more or less a shambles but I’ve said too many times this year as well, we’re not that group anymore.