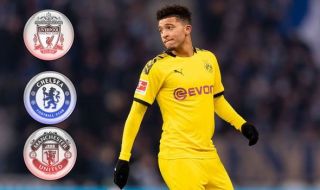 Manchester United are reportedly confident they are in pole position to sign Jadon Sancho.

That’s according to the Mirror who claim United believe they can strike a deal with Borussia Dortmund.

The Red Devils have been linked with the England winger, formerly of Man City’s youth system, for a long time.

It remains to be seen whether Sancho will move from the Bundesliga outfit in January or in the summer. Either way it looks like something is happening in regard to Sancho’s future.

However, with Daniel James impressing on the right-wing, where would a potential Sancho arrival leave the Wales international?

James is an exceptionally good crosser of the ball and Ole Gunnar Solskjaer should be in the transfer market looking for a goalscorer with aerial presence to make the most of his winger’s attributes.

But the world is talking about Sancho at the moment and we all want United to sign the best young players around.

It is a concern that he’d be leaving Dortmund under a grey cloud. As talkSPORT report, the England international feels scapegoated at the club and wants to leave as a result.