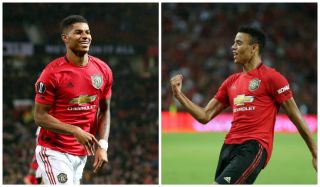 Everyone at Manchester United is buzzing after Mason Greenwood became the youngest player in the club’s history to score a brace in European competition.

On Thursday night, Greenwood got on the scoresheet twice as Man Utd beat AZ Alkmaar 4-0 at Old Trafford.

Aged just 18, the striker is one of the youngest players in Solskjaer’s squad.

Marcus Rashford, who knows a thing or two about bursting onto the scene with goals, popped a joke about Greenwood looking so young — picturing two kids watching the match and suggesting they are pushing to get on the pitch themselves.

Strangely enough, Greenwood does not have a blue tick on his Twitter account, to prove his identity, and Rashford poked fun at that too.

What’s @Twitter doing not giving you a blue tick yet pal? 🤷🏾‍♂️

Who we gotta @ around here to get this done? 🤣