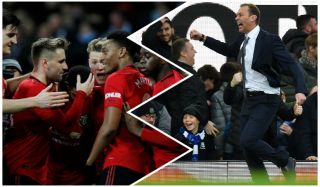 Manchester United host Everton in the Premier League on Sunday.

Everton had a big win last weekend with Duncan Ferguson taking charge following Marco Silva’s sacking. It had been a tough few weeks for the Toffees but beating Chelsea 3-1 should give the team confidence moving forward.

Dominic Calvert-Lewin was the star of the show for the Toffees, scoring a brace against Frank Lampard’s side. Richarlison, who The Sun has linked with a January move to Man Utd, also contributed with a goal.

Despite Everton’s win over Chelsea, Ferguson will need his players at their very best to get a win on the road against United, especially after seeing the Red Devils beat Tottenham Hotspur and Man City in the league last week.

Moreover, United were able to make it three wins from as many games on Thursday night with an impressive 4-0 victory over AZ Alkmaar in the Europa League.

Ole Gunnar Solskjaer will demand more consistency from his team in the coming weeks, with the busy festive period now in full swing, and there is still much room for improvement with key players like Paul Pogba still to return from injury.

Manchester United won’t want to be reminded about the last time they faced Everton, in April. The match was played at Goodison Park with the Toffees winning 4-0.

We fancy United to make it four consecutive wins by beating Everton on Sunday. The Reds are a much stronger side and have found some good form in recent weeks.