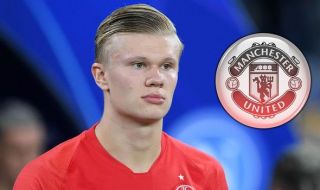 The goalscorer has made a huge impression this season as he scored 8 goals in the Champions League group stages and Fjortoft believes the teenager has several options on the table.

Sky Sports reported on Man Utd head scout Marcel Bout being in attendance for Salzburg’s 2-0 defeat at the hands of Liverpool, which resulted in the Austrian side being eliminated from the Champions League.

“The links with United are inevitable given his past association with Solskjaer and I think the way United are working at the moment would be attractive for him,” Fkortoft told Independent.ie.

“They are looking to develop young players and are signing the best talent in Europe and there is no doubt at this moment Haaland is in that category when you see what he has done in the Champions League this season.

“It is all about picking the right club now. I expect him to move in January because any club scout who is not looking at a 19-year-old with this much potential needs to be fired, so he will have options.

“I know Borussia Dortmund are very interested, but it is up to Team Haaland now to decide what happens next. They turned down a move to Juventus when he moved to Salzburg as they felt he would develop better playing regular first-team football and they got that decision right. Now they have another choice to make.”

Solskjaer needs to sign a top goalscorer before next season and January may be a difficult time to do so, but if Haaland is on the move you would like to think we’d jump at the opportunity to sign him — even if it meant loaning him back to Salzburg until the end of the season.

The big question now is who misses out on a place in the line-up if Haaland does come in?

Anthony Martial is currently starting games as our centre-forward but with Daniel James’ quality crossing, United need a striker with aerial presence.

Then there’s Mason Greenwood, another star for the future, and with Haaland United should be putting the sword to teams up and down the Premier League.