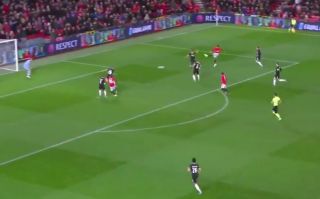 Ole Gunnar Solskjaer’s side needed to avoid defeat on the night to ensure they qualify top of group L, and avoid potentially tough knockout clashes against Inter Milan, RB Salzburg and Ajax.

And after a drab first half for the Reds, the job has been completed in a matter of minutes.

Following a brilliant team move down the left-hand side, Juan Mata appeared to have wasted a great crossing opportunity as his cross flashed across the six yard box. But right-back Ashley Young finished at the far post to give the underwhelming Reds the lead.

Greenwood double the lead moments after with an excellent finish from outside the area, and was then felled for a penalty.

Juan Mata covered the spot-kick, before Greenwood cut in and struck low to score United’s fourth.

A rollercoaster start to the second half that few fans could have predicted after a lifeless first half at Old Trafford.

See the goals below, courtesy of BT Sport :

This game has come to life!