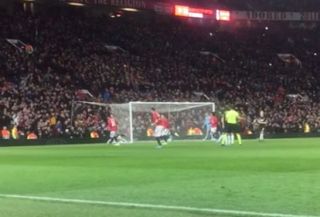 Juan Mata got his name on the scoresheet as Man Utd beat AZ Alkmaar 4-0 at Old Trafford tonight.

The win secured first place in Group L for the Red Devils, with AZ Alkmaar runners-up.

After a pretty boring first-half, Manchester United went up a gear or two, scoring four goals in 12 minutes.

Mata scored one of those from the penalty spot as United brushed their Dutch opponents away.

The Spaniard has been criticised this season but I think everyone can see he’s past his best.

Still, Mata is a good professional and one Ole Gunnar Solskjaer definitely wants to have in the dressing room.

He took his penalty well and one fan was quick enough to record footage of the goal, as seen below (via Reddit u/RealRabona)