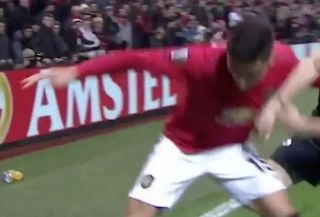 Midfielder Andreas Pereira pulled off a clever piece of skill in the lead up to Ashley Young’s opening goal against AZ Alkmaar tonight — which drove Manchester United on to a 4-0 win to top Group L in the Europa League.

A move down the left flank saw Pereira trapped by the corner flag.

The Brazil international turned with a beautifully planned move to break away and pick out a pass for Young inside the box.

READ MORE: Hargreaves explains why he was so impressed with Man Utd against AZ

Pereira made it look super easy and he’ll be proud of it looking back!

Stuck in the corner? No problem for Andreas Pereira 😎