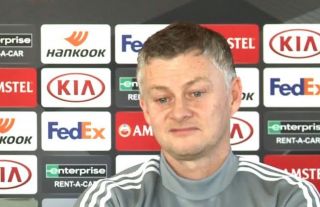 Ole Gunnar Solskjaer has given an exclusive pre-match interview to ManUtd.com and has promised to rotate his side tonight in the Europa League against AZ Alkmaar.

The Manchester United manager started with an inexperienced XI in our most recent Europa League game, away to FC Astana, but we can expect more senior players to be involved against AZ Alkmaar.

Solskjaer has spoken about wanting to win the game, though United only need to avoid defeat in order to clinch 1st place in their group ahead of their Dutch opponents — with both clubs already qualified for the knockout phase.

The Norwegian is happy with the experience the young lads gained from playing against Astana despite the game ending in a 2-1 defeat.

It allowed some of the senior lads to work on their fitness back in Manchester with coaches Michael Carrick and Kieran McKenna. Solskjaer believes that contributed to last week’s wins over Tottenham and Man City but now all eyes are on the Europa League. For tonight at least.

“Obviously the decision we made [on taking the youngsters on that trip] has paid off,” Solskjaer said. “The young players got the experience and the lads back here trained and were fresh, and I think that’s the reason that we could still hang on to the win, 2-1 against City and the Tottenham one, so that was down to Kieran [McKenna] and Michael [Carrick] keeping them fit.”

Solskjaer has said there will be some rotation tonight with United’s hectic schedule over the festive period. This competition has given the manager opportunities to give fringe players and youngsters game time, and we are expecting much of the same tonight.

“This week there will be some rotation, we’re through so we’re happy with that,” he added. “But we have loads of games coming up and we’ll need players to be match-fit when called upon because some of them haven’t played enough and some youngsters will play definitely. But we want to go through as the winners [of the group] and it’s our aim to play a good game and give game-time to a few players.”

With Nemanja Matic back in contention to be selected, Solskjaer should be able to form a more stable midfield for a second string side and his experience should benefit the younger lads.

If United top their group in the Europa League they will avoid the Champions League drop-outs in the next round.

That should be enough to encourage the lads to go out and get the win.

Solskjaer should be looking at finishing in the top four as well as winning the Europa League this season.