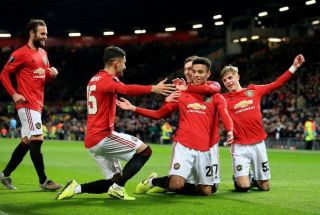 Ole Gunnar Solskjaer praised Mason Greenwood after his brace against AZ Alkmaar, while Juan Mata described the youngster as a ‘killer in the box’.

Man Utd knew their place in the round-of-32 was secured before kick-off but had to avoid defeat in order to top Group L in the Europa League.

They did just that and managed to beat AZ Alkmaar 4-0.

After a fairly bland first 45 minutes, Manchester United found their rhythm in the second-half.

READ MORE: Hargreaves explains why he was so impressed with Man Utd against AZ

Speaking to BT Sport after the game, Solskjaer was asked about Greenwood. He said (via TEAMtalk): “Yeah, different class as a finisher. When he is in and around the box we expect him to get a shot off and on target because he is so precise in his finishing.

“It’s just natural for him to score goals, doesn’t matter what level he’s at.

“He is good in the way he creates space for himself — very pleased with his performance.”

Greenwood’s brace took his tally to seven goals this season — in all competitions — and Mata singled out the 18-year-old for praise in a post-match interview with BT Sport (also quoted by TEAMtalk).

“Every time he plays he scores. In training and in games, he might not touch the ball a lot but when he’s in the box, he’s a proper finisher. He’s a killer in the box.

“We are very happy for him and he is developing very well. Nice kid and two goals in Europe.”

The future is bright for Greenwood but we need to make sure his talents are nurtured properly.

As far as we’re concerned, he’s the best finisher at the club. Now when he gets the ball in or around the box you fancy him to score.

Greenwood is a lethal presence to have in attack and we’re buzzing to see him develop further at Old Trafford.