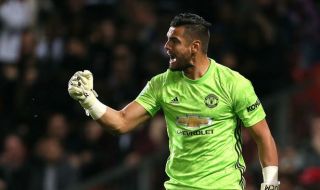 Unsurprisingly, Ole Gunnar Solskjaer has rung the changes from the stunning victory against Manchester City at the Eithad on Sunday, with Anthony Martial and Harry Maguire the only players to retain their place in the side.

Romero sits behind a new look back four including Ashley Young, Brandon Williams and Axel Tuanzebe.

It’s very rare that a second-choice goalkeeper reaches such an impressive appearance tally at a club, but Romero has been the ultimate professional at Old Trafford since joining on a free in 2015.

The Argentina international has often stepped up when called upon, notably in United’s Europa League run under Jose Mourinho in 2017 where he was rewarded with a start in the final.

Romero is one of the most capable back up ‘keepers in the world and has been more than adequate in the absence of such a world-class goalkeeper in David De Gea.

We hope the 32-year-old is quiet tonight as United look to avoid defeat to ensure they top Group L and avoid a tricky knockout round against Inter Milan or Ajax.