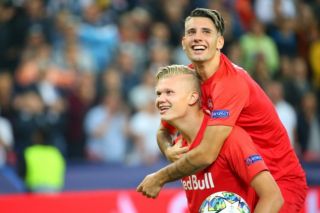 Manchester United have not given up on Erling Haaland despite the striker considering offers from Borussia Dortmund and RB Leipzig after visiting the two Bundesliga clubs, according to a report.

That’s the latest from Fabrizio Romano and Marcus Christenson, as per The Guardian, with the journalist duo reporting on the latest news surrounding the Red Bull Salzburg goalscorer.

Haaland has scored 28 goals in 22 games for his club this season which explains why so many big clubs are doing all they can to sign him by next summer.

READ MORE: Man Utd will have to stump up £128m to prise midfielder from La Liga giants

It is understood that BVB and RB Leipzig are pushing hard to get a deal done in January, but United as well as Juventus are not prepared to give up just yet.

Red Bull Salzburg’s Erling Braut Haaland has arrived in Dortmund along with agent Mino Raiola for talks with Borussia Dortmund, according to RN. #BVB #RBS

Both clubs have previously done lots of business with Haaland’s agent, Mino Raiola, so it will be interesting to see where he ends up.

But apparently Haaland and his family are concerned that playing time would be limited at United, with Marcus Rashford and Anthony Martial there, but neither of those players a true centre-forwards and that’s what United need.

It’s a different story at Juventus who already have Cristiano Ronaldo, Gonzalo Higuain and Paulo Dybala.

Haaland would be a regular starter at United. Those crosses by Daniel James are crying out for a striker like him.