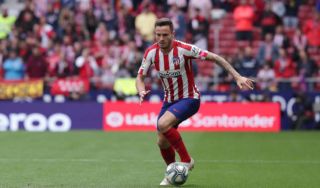 Man Utd will reportedly have to pay a transfer fee of £128million in order to sign Atletico Madrid midfielder Saul Niguez.

That’s according to Mundo Deportivo (via Goal.com) and it suggests how highly Saul is regarded by head coach Diego Simeone, who will be reluctant to lose a star player a year after seeing Antoine Griezmann join Barcelona.

It is noted that United are unlikely to stump up such a fee unless Paul Pogba ends up leaving the club to join Real Madrid.

Given that the French midfielder has been missing for much of the season through injury, and has been a huge loss to the team, we’re finally starting to see the team cope in his absence following league wins over Tottenham Hotspur and Man City.

Saul, 25, had made 270 appearances for Atletico Madrid — scoring 35 goals and providing 18 assists. United need a player of his ilk in midfield even if Fred is starting to show some improvements in his performances.

The Spain international is one of the finest midfielders in Europe and would undoubtedly be a brilliant addition as Solskjaer attempts to rebuild the squad to make the Red Devils a successful outfit again.

Saul’s contract doesn’t expire until 2026 meaning Los Rojiblancos are under no pressure to cash in. And, if they were to sell Saul, they’re in a position that they can demand a high fee in return for his signature.