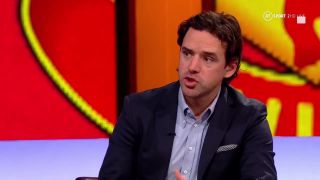 Star in the making Mason Greenwood netted a brace as United scored four goals in 12 minutes to win and claim first place in Group L.

Ashley Young opened the scoring shortly after the break — then goals flowed with Greenwood adding two and Juan Mata finishing from the penalty spot.

Greenwood stole the show with his two goals — becoming the youngest player in Manchester United history to score a brace in European competition.

Hargreaves was also impressed with the tempo of United’s second-half display.

“Michael (Owen) and I were just talking and every time he shoots, he is so composed. He never tries to smash it, he picks a corner, he makes it look easy.

“In the second half, I thought Manchester United were outstanding, positive, they pressed, they were more aggressive and they got more in the half of AZ and absolutely blew them away.

“One of their best halves of football this season.”

It’s great to see United bring the momentum they’ve built in the Premier League over the past week into the Europa League.

Now attention turns to Everton on Sunday where we really need to continue making ground on the race for top four.

Solskjaer should be aiming not only to finish in the Premier League’s top four, but also to win the Europa League. That would be an impressive first season for the manager!