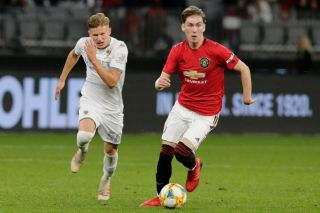 Man Utd have already booked their place in the knockout phase, as have tonight’s opponents, but 1st place is still up for grabs. All United need to do to top the group is avoid defeat.

As expected, Sergio Romero starts between the posts after joining Solskjaer in the pre-match press conference on Wednesday.

We had a feeling Ashley Young would start at right-back, as seen here, with Brandon Williams operating on the opposite flank.

Axel Tuanzebe has been given a chance to impress at centre-back alongside Harry Maguire. Many fans believe this is United’s best defensive partnership, so the former has a chance to prove himself tonight.

It looks like a 4-3-3 with Nemanja Matic, Andreas Pereira and James Garner forming a midfield trio.

That leaves Juan Mata, Anthony Martial and Mason Greenwood up front. The Spaniard is likely to play in the hole behind the striking duo.

See the full team below: