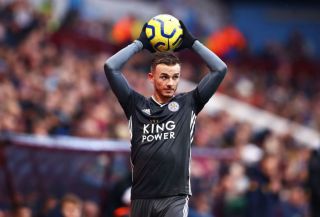 Ole Gunnar Solskjaer signed Harry Maguire from The Foxes last summer and Murphy reckons Maddison will make the same move if the right offer comes in.

Murphy told The Debate on Sky Sports: “You cannot tell me there’s a young English footballer at Leicester who will turn down United. Not gonna happen. If United come in for James Maddison, and pay enough, he’s gone.

“United are a big enough… I’m not a United fan, but they still have the draw. To play at Old Trafford, Theatre of Dreams, rather than the King Power Stadium, irrelevant of league position, he’s gone.”

“You cannot tell me there’s a young English footballer at Leicester, no matter how well they are doing, who would turn down Manchester United. It’s not going to happen.”

Right now, you’d have to say Leicester are the second best team in England. Brendan Rodgers deserves credit for the job he’s done there — and to get the best out of Jamie Vardy again took some masterstroke.

Meanwhile, United have struggled to compete for a place in the top four for much of the season.

But United still have a massive pull factor. If Solskjaer can show that the team is going in the right direction, Maddison and other targets will want to be part of the rebuild and see MUFC successful again.

Maddison would be a welcome addition at Old Trafford, too. An upgrade on Jesse Lingard to enhance our play in the final third.

It would make sense for Maguire and the other England lads at United to suss Maddison out and persuade him to make the move. Solskjaer needs a playmaker in January or next summer.