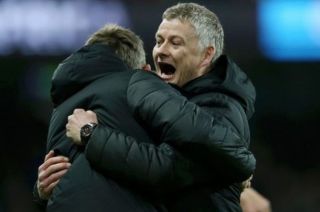 Manchester United may have just pulled off their most impressive results under Ole Gunnar Solskjaer since the victory away to Paris Saint-Germain back in March, but that should not deter the club from delving into the transfer market next month.

The Red Devils have propelled themselves from a lowly 9th position in the table to 5th in the space of three days. Thanks to Chelsea’s recent stall in results United are now only five points behind the capital club who occupy the last Champions League spot.

From an outside point of view, it may seem as if the club have turned a corner and things are looking up, but anyone that has followed United closely this season will know there are still many issues for Solskjaer to solve. The Norwegian has masterminded victories over Spurs, Chelsea, Leicester and now City, whilst also taking a point from Arsenal and Liverpool this season. The results against the top sides has been very impressive but it is the performances against the lower ranked opposition that has caused so much concern.

One of the main reasons for the dip in results and performances against teams that are content with sitting in against United is the Red Devils lack of creativity. Playing with Jesse Lingard in the attacking midfield role against a team like City works well as he can utilise his energy and pace, but the 27-year-old lacks the quality in possession to unlock compact defences.

The situation has not been helped by Paul Pogba’s prolonged injury absence. The divisive midfielder may split the fanbase, but he is certainly United’s most creative man in the middle of the park. Despite the World Cup winners imminent return Solskjaer, Woodward and the Glazers must not hesitate to move in the transfer market if the right opportunity arises. James Maddison would probably be the first name on most fans lips if they were asked for their ideal signing but more realistic options such as Bruno Fernandes or Jack Grealish would still provide a significant step-up in the quality on offer at Old Trafford.

Until recently scoring more than one goal in a match was a major issue for United. Anthony Martial’s return from injury eased those woes, partially down to the Frenchman’s return to form but also because it allowed Marcus Rashford to return to the left-wing. The England international has been in scintillating form ever since and has become a somewhat talismanic figure at the club in recent weeks.

However, reinforcements at the top end of the pitch should still remain a priority.

United lack strength in-depth out wide and up-front and another injury to Martial, Rashford or Dan James could derail the club’s top four push. Erling Braut Haaland the 19-year-old Salzburg sensation has been tipped to make the move across Europe but where that would leave Mason Greenwoods future, only a year Haaland’s junior remains unclear. Jadon Sancho is rumoured to be unsettled at Dortmund despite his return to the first team after several disciplinary actions were taken against him last month, as per the Daily Mail, who reported on punishment he received after returning late from international duty. The former City youth player has lit up the Bundesliga over the last 18 months and became only the fourth teenager to score 20 top-flight goals when he bagged a brace against Dusseldorf at the weekend. James and Rashford are Solskjaer’s only first team wingers and another option to provide competition and back-up over the long season ahead is surely a necessity.

The recent good results have provided Solskjaer’s side with an opportunity to return to the Champions League next season. The top six have been far less dominant than previous seasons, with the exception of Liverpool, and United must take advantage of this. Despite the clubs troubles this season they are still within touching distance of fourth place. Failure to spend the substantial funds available to the club in the January transfer window would show a complete lack of ambition from the owners and board.

Fourth place is up for grabs and United may only be one or two top signings away from securing it. Doubts have been cast over Solskjaers tactical ability as a manager and with good reason after losses to Crystal Palace, Newcastle and Bournemouth already this season, but the recent victories have shown Ole and the squad have potential. The club’s hierarchy now need to do their bit and back Solskjaer in January to help him and his young squad out.

Reinforcements are still required for Solskjaer. Ed Woodward and the Glazers need to put their hands in their pockets and provide their manager with the tools to see the job through.